Kaaleb Adera’s first semester at the University of Virginia was a daily blur of transitions. The aspiring biology major from Fredericksburg, Va., took on an ambitious course load that fall three years ago, but the one-credit seminar titled “Myths of Adolescence & Literary Imagination,” may have done more to help Adera chart his course, in and out of the classroom, than any other.

Poetry professor Lisa R. Spaar’s seminar on the literary explorations of adolescence did not persuade Adera to change paths and become an English major. But because the instructors of the College of Arts & Sciences’ first-year advising seminars, or COLAs, also serve as advisors for the students in those classes, Adera and the 17 other first-years in that “Myths of Adolescence” class developed a comfort level and familiarity with Spaar that allowed them to view her as a friendly sounding board and ally throughout their undergraduate careers.

Almost immediately, Adera had found a faculty mentor to help him learn how to juggle the study demands of that fall class schedule along with the social learning curve of dorm life and necessary chores such as figuring out the difference between Alderman and Clemons libraries.

“Almost from the beginning, I felt comfortable with Prof. Spaar in her class,” said Adera, a rising fourth-year Biology major now preparing to apply to dental school. “It was nice to have that connection with an advisor early on. She gave me some suggestions on other English classes and wrote me a recommendation for a medical/dental internship program this summer at Case Western University.

“As a faculty member, she’s made it comfortable for me to come to her with any issues I may be having. She’s been a good resource.”

Other universities offer college-advising seminars to incoming students, but those typically focus exclusively on study skills and other issues related to acclimating to college. The COLA program was launched in 2005, however, with eight small academic seminars, with COLA instructors setting aside about 20 percent of their weekly class time for advising topics such as the add/drop process for classes, the different source available to help pick future courses, library resources, scholarship and research opportunities, the various study abroad options available and other topics both related and unrelated to the seminar.

They were devised as a departure from the traditional advising structure, which assigns faculty advisors to undergraduates who have yet to declare a major. Those students typically meet with their assigned advisors once a semester in advance of completing course requests for the following semester, but they may rarely see those non-major advisors otherwise.

The program’s success in fostering productive, more long-lasting advising experiences for undergraduate students led the College of Arts & Sciences to double its voluntary COLA seminars almost every fall semester. This fall’s incoming class of first years in the College will be able to select from 60 different, COLAs, the largest number offered yet. 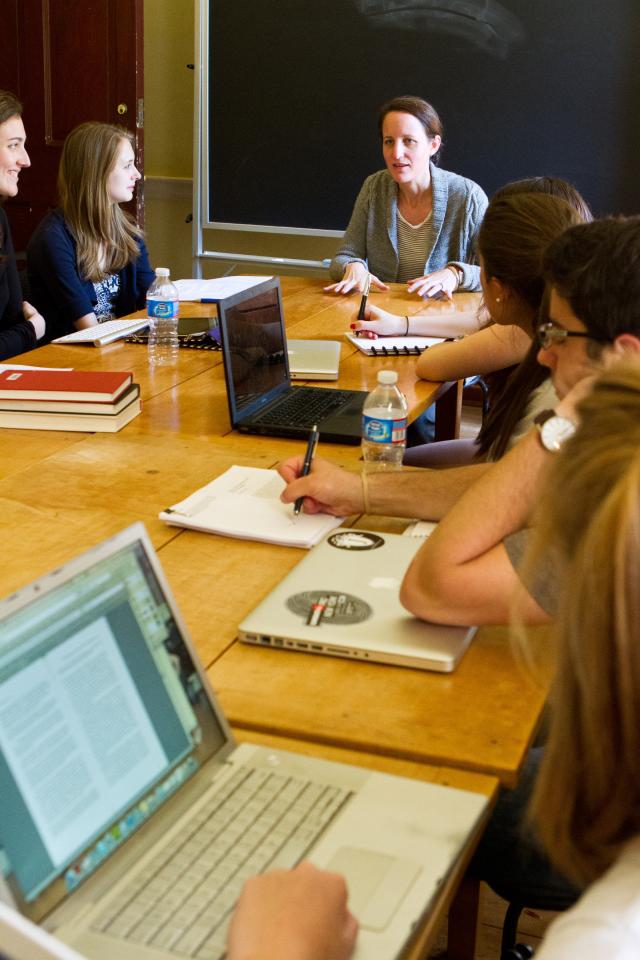 “When we started the program, we were looking for ways to improve advising,” said Prof. Rachel Most, Associate Dean for Undergraduate Programs. “We wanted to create a format in which students would have regular contact with their faculty advisors, and so the idea was suggested to create a one-credit class that was primarily academic in content but that also would cover a lot of advising-related issues for the College.

The COLA seminars’ topics reflect the broad spectrum of academic specialties of the faculty members offering them, all designed to pique the interest of first-year students who are encouraged but not required to take them.  This fall’s COLA topics range from “God and Nature in America,” Edgar Allan Poe, and a survey of key human developments “From Stone Tools to Cell Phones” to academic discussions of the racial and cultural allegories employed in “Game of Thrones” and an examination of what pop culture’s fascination with zombie apocalypses tells us about contemporary political and social life. (“Zombies. Political?”)

A permanent endowment for the COLAs was established with a gift by the Souder family, allowing for the sponsorship of a seminar each fall, as selected by the Office of the Dean. This fall, the 18 first years who sign up for the Souder Family College Advising Seminar – “The 21st Century Labor Force” – will be taught and advised by U.Va. President Teresa Sullivan. The Parents Program has also generously donated to the program (both last year and this coming year) covering about 10 COLA classes per term.

“The COLA program is a proven success that we are now expanding so we can allow more students to experience this unique blending of academics and advising,” Sullivan said. “Our commitment to growing the COLA program aligns with the priorities in the University’s Cornerstone Plan, which include strengthening U.Va.’s distinctive residential-learning culture, improving advising, and delivering new levels of student engagement.”

Since the COLA program’s launch, it has attracted a growing cadre of the College’s top faculty, professors who typically teach upper-level classes that ordinarily would limit their interaction with first- and second-year students.  As director of the English Department’s Area Program in Poetry Writing, Spaar was among the senior faculty members who supported the COLA model as a new way to strengthen the advising experience, for first years as well as professors.

“Having started teaching in 1980 as a TA in the Graduate School, I’ve had many years to watch first-year students, and I feel it’s really important for us as faculty to know who they are and what ways we can meet them where they are in terms of their interests and the ways they learn, the way they use language,” Spaar said. “It’s something that I want to stay in touch with, and it’s something that I feel like I have to do if I want to continue to teach young people.”

Paul Freedman, the associate chair of the Department of Politics, served on the same Directors and Chairs committee with Spaar that first started discussing COLAs. This fall, “The Politics of Food” seminar that he will lead will examine the production and consumption of food in a political context. In past semesters, Freedman’s COLA students have taken as part of the course kitchen tours of the Observatory Hill dining hall where so many of them eat each day.

“This is one of the most exciting innovations in college advising in probably a couple of decades,” Freedman said. “The students get a lot more ‘bang for the buck’ than with the standard model of advising.

“When I say ‘bang for the buck,’ what I mean is a little bit of advice, attention, concern, interest and thoughtfulness on the part of an advisor can really make a difference in not just the courses a student signs up for, but in how the student is thinking about her college experience generally and in what connections she’s making between what her goals are and the specific courses she’s registering for. “

Rising fourth year Rachel Deitch heard of Prof. Freedman’s COLA before she even arrived in Charlottesville. Volunteering in the office of a U.S. Congressional representative from Illinois while in high school, the Arlington, Va. native says one of Freedman’s former students there recommended his classes to her.

Since taking Freedman’s “Politics of Food” COLA three years ago, Deitch still consults with him as her major advisor in the College of Arts & Sciences’ American Government program. Under his guidance, she and a U.Va. graduate student were recently awarded a Double Hoo Research Grant from U.Va. to complete a project on various legislative proposals related to Alzheimer’s research.

“The class solidified my interest in politics, no question,” Deitch said. “I felt like I had a really good connection academically with Prof. Freedman.”

One Popular COLA: “Are We Alone in the Universe?”

At 6-foot-7, Astronomy professor Ed Murphy is easy to spot as he walks across Grounds. Yet he recognizes that most of his students, whose interactions with him are limited primarily to the larger, Intro to Astronomy survey courses that he teaches for non-science majors, are hesitant to approach him outside the lecture hall. It’s one of the reasons he relishes meeting 18 first years each fall in his “Are We Alone in the Universe?” COLA.

The seminar explores the concept that, in a galaxy containing hundreds of billions of stars, even if only a small fraction of those stars have a planet that could support life, and even if life forms only on a small fraction of those planets, there still could be thousands of intelligent civilizations in the galaxy. Murphy’s COLA covers a multidisciplinary range of topics that include astronomy, the evolution of intelligence, the origins of life, spaceflight and the difficulty of traveling between the stars while addressing the Fermi paradox, the belief that intelligent life is common, and it should have colonized our solar system long ago, and yet we see no evidence that they exist elsewhere in the galaxy.

It’s a head-spinning range of topics for a one-credit seminar that meets for one hour and 15 minutes a week.  And yet within the context of his COLA’s “is anyone out there” discussions, Murphy said the crucial element is the 20 minutes or so devoted each class to advising topics.

When students ask him for the best way to pick classes for the next semester, Murphy pauses and leads a discussion about the strengths and weaknesses of websites such as RateMyProfessor.com. He points them to the University’s own course-evaluation system built on student reviews and encourages them to consult with their resident advisors and other upper class students they may know for anecdotal recommendations. Each fall, he invites a representative from the University’s Study Abroad Office to visit the seminar to deliver a brief presentation. He even budgets time to walk his COLA students over to University Career Services so that they can begin to consider the internship and job search tools available.

And over the course of the semester, Murphy said, he gets a stronger feel for his 18 students and how he can help them chart their path at U.Va.

“One of the reasons I was really interested in teaching a COLA is that this program started, I would be assigned 18 to 20 new undergraduate advisees each year,” Murphy said. “I would see them for a 20-minute appointment wen they were picking classes for spring, and then for another 20 minutes in the spring to pick classes for the next fall. And over the course of two years, I may have sat with them for an hour, total.

“I wasn’t doing a service to these students because I didn’t know them well enough to understand what were their strengths and interests, what were their weaknesses. In many cases, I  couldn’t even remember the students’ names from semester to semester. I wanted a way to get to know the students better, and the COLA was a perfect opportunity. Now when we have those advising appointments, we’ve had that shared experience of sitting in a classroom together for 17 or 18 hours, and I know them so much better.”

In some cases, the advising relationship endures past the student’s graduation. COLA instructors frequently remain popular sources to write letters of recommendations for graduate programs, jobs and fellowships pursued by their advisees. Spaar laughed when she recalled the FBI agent who visited Charlottesville one summer to interview her for a background check required for a government job sought by one of her former students.

The depth of Spaar’s knowledge of her former student, including where her boyfriend went to college, what summer internships she had completed and other personal information, impressed the FBI agent.

“He said, ‘Gosh, you know a lot about this young woman, and you haven’t had her since first year,” Spaar said. “But once you get know someone like that, the relationship continues.”

Lorenzo Perez is Senior Writer in the College and Graduate School of Arts and Sciences. 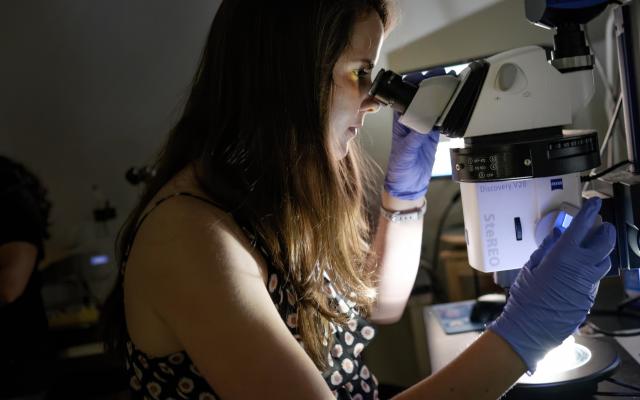 Neuroscience undergraduate programs prepare scholars for life in the lab.