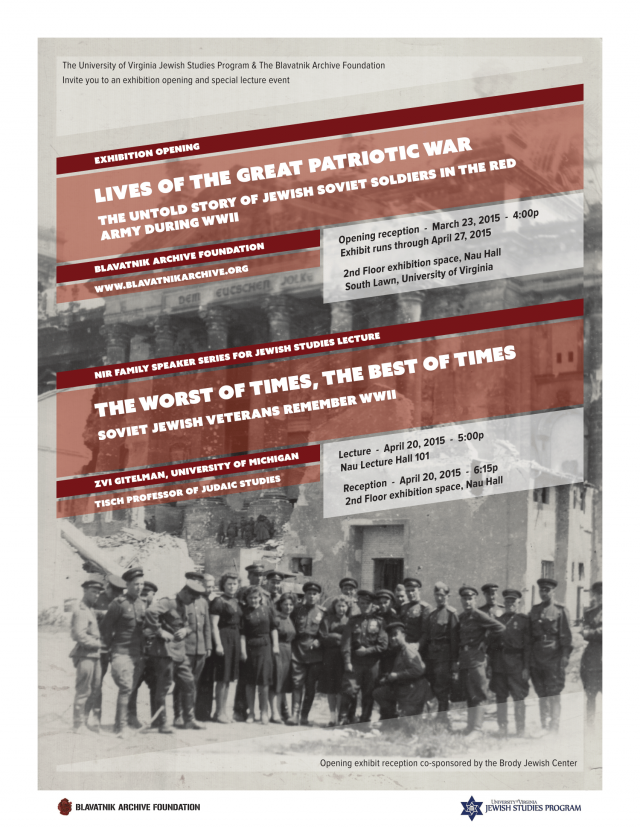 It took nearly nine years of interviews of World War II veterans in eleven different countries to document the heroism and wartime experiences of a previously neglected group of Allied Forces soldiers.

About 500,000 Jewish soldiers fought in the Soviet Armed Forces against Nazi Germany during what the Russians still call the Great Patriotic War. A new traveling exhibit, opening on March 23 at the University of Virginia, sheds new light on these soldiers’ experiences on the Eastern Front and provides a multi-media overview of the war on Soviet soil and the factors influencing its direction and outcome.

Organized and funded by the Blavatnik Archive Foundation, “Lives of the Great Patriotic War: The Untold Story of Jewish Soviet Soldiers in the Red Army During WWII” will run through April 27 in the second-floor exhibition space of the South Lawn’s Nau Hall. The exhibit features video excerpts of the oral histories of nearly 1,200 Jewish war veterans and their families, as well as interactive displays that include a collection of wartime diary and letter excerpts – in English and Russian texts – and reproductions of archival postcards and photographs.

Associate Prof. Gabriel Finder, director of the College and Graduate School of Arts & Sciences’ Jewish Studies program, called the wartime experiences spotlighted in the exhibit critically important. So much research and discussion has been devoted, understandably, to the Holocaust and the Nazis’ genocidal efforts, he said.

“But this is a different story. This is a story of Jewish heroism and resistance, not only of German Jews, but of Soviet Jewish soldiers,” Finder said. “And it’s so interesting because it’s a rather under told story. These were young men and women who went to war both to defend the Soviet Union from Germany and the Nazis, but also to defend the Jewish community from annihilation. They had these two important missions in mind. “

The traveling exhibit made previous stops at Harvard University and at the University of Southern California. Industrialist and philanthropist Len Blavatnik founded the New York-based Blavatnik Archive Foundation in 2005 to promote a better understanding of the Jewish experience in the Soviet Union.

The exhibit arrives at U.Va. as the 70th anniversary of Germany’s surrender approaches this year.

“This is particularly a special year,” Blavatnik Archive Foundation director Julie Chervinsky said, “because those few veterans who are still with us, we try to honor them as much as possible.”

In connection with the Blavatnik Archive Foundation exhibit, the Nir Family Speaker Series for Jewish Studies will feature an April 20 lecture by Prof. Zvi Getelman, the Tisch Professor of Judaic Studies at the University of Michigan. A world-renowned scholar of Russian Jewish history, Getelman will deliver a lecture titled, “The Worst of Times, the Best of Times: Soviet Jewish Veterans Remember World War II .”