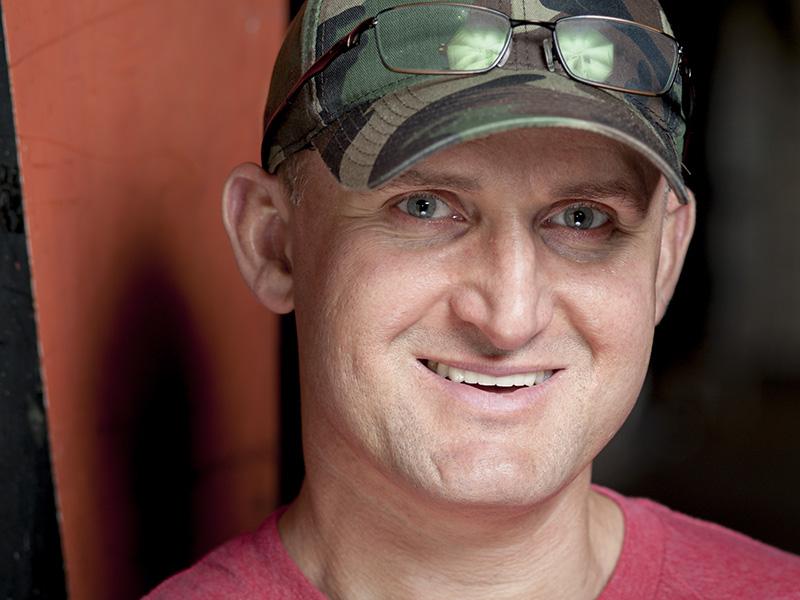 Steven L. Warner, a beloved teacher, mentor, and professor in the Department of Drama, died on November 3 following a short but rapidly deteriorating heart condition. Warner, 52, enthusiastically shared his unique talents as a brilliant theater production specialist with collaborators across UVA and the community.

Warner is survived by his wife, Bri, their son, Alex, and extended family.

In his 16 years on Grounds, Warner cultivated relationships far beyond the classroom and the backstage shops of UVA’s theaters, where his technical expertise was deeply valued. His colleagues in the Department of Drama, as well as former students inspired to pursue careers in professional theater, film, the entertainment industry, and teaching, were joined in mourning by the many friends Warner made playing pickup basketball on Grounds, lending his technical expertise to colleagues in UVA’s facilities management division, and volunteering on community projects.

A celebration of Steve’s life will be held on Dec. 4 at 2 p.m. in the Culbreth Theatre. The College’s Department of Drama will provide a live stream of the event here: https://drama.virginia.edu/steve-warner-celebration-amazing-life

“His loss will be felt across the department, the University, the Charlottesville community, professional theatre and the entertainment industry, on all of which he leaves a deep impact,” Department of Drama chair Richard Will wrote in a message to Warner’s colleagues posted on the Department of Drama’s website.

From the Circus to Academia

A 2013 C-Ville Weekly profile aptly described Warner as “a West Texas native who speaks with a slight drawl and brings a calm intensity to his classroom and his work.” When he was younger, he originally envisioned himself coaching sports as a career. He found a new path growing up, however, when he volunteered in a theater department. He interned at the Utah Shakespeare Festival while attending the University of Delaware’s graduate drama program, and after completing his MFA in entertainment production and management in 1999, he went on to work with the Ringling Brothers Barnum and Bailey Circus. During those years, Warner lived in a train car “and immersed himself in every aspect of production, including the handling of animals.”

Following stints with the Texas Shakespeare Festival and Alley Theatre, among others, Warner went on to work for six years for the world-renowned Cirque de Soleil in Las Vegas, where he held production management positions on “O” and several other Cirque shows and served as Projects Supervisor for its Resident Shows division.

That track record of professional accomplishment at the highest levels of the entertainment industry lent him immediate credibility with the graduate students who studied technical direction under Warner after he joined the College and Graduate School of Arts & Sciences’ Department of Drama in 2006. Justin Smith, who completed his MFA in Drama in 2011, with a focus on scenic design and technical production, was in the second cohort of graduate students with whom Warner worked.

“During his years at Cirque du Soleil, Steve was making some of the highest-level theatrical entertainment in the land. I would posit to say that what they do at Cirque du Soleil is Broadway level or even more difficult at times,” said Smith, now a professor of technical theater at Santa Rosa Junior College. “The ‘KÀ’ show in Vegas that he worked on, they had a $250 million budget to take that theater from what started as bare concrete and then make it one of the best shows on the Strip. He had the pedigree educationally and professionally, and he was just the rock, the anchor in the program for his students.

“The work we do in theater production, it's always fast-paced, with tight deadlines that leave you wondering, ‘how are we going to do this?’ But Steve was always there to say, ‘we'll find a way, we'll do it.’  He wasn't easily upset, and he was just steady.  We all need a little bit of steady in our lives, especially when you're in the educational environment.”

Warner’s roles in the Department of Drama included Technical Direction and Operations/Production Management.  He managed the operations of the Culbreth and Helms Theatres, and of the Ruth Caplin Theatre after its opening in 2013.  Overseeing numerous critical renovations to UVA’s theater spaces, he also earned the department a Virginia Safety Star Award. As Technical Director, he supervised dozens of theatre productions during the academic year and the summer Heritage Theatre Festival.

His death has left many of his colleagues overwhelmed by the loss, said lecturer Cady Garey, faculty adviser for the student-run Virginia Players organization.

“I do not know how he did it,” Garey said. “He was consistently a problem solver/emergency go-to person in our department, but he managed to always be upbeat about helping in any way he could. You could count on him to jump in and help. He was so generous with his time and presence, and his kindness to all was powerful. He was so excited to work with students. He loved the time he spent in the classroom, in the shop, in the halls, in observation of other classes. … Steve was quick to sing your praises and be humble about his own work.”

When he spoke to students and others about his decision to take the teaching job at UVA, Warner talked about the University and its surrounding community as his “forever home.” He loved following UVA’s sports teams and embraced as much of the University’s culture as he could. Befriending Facilities Management staff members, he offered them his expertise to repair some of the electrical rigging in the Chemistry Building. Last summer, he employed his welding skills to repair a portable stage used by the UVA football program for various events. And if there was a regular pickup game at North Grounds or elsewhere at UVA, he was sure to be found on the court.

His courses included “Scenic Technology” and the popular “Art of the Creature,” in which students studied the creative and technical arts of modern Hollywood special effects. That class grew out of the Festival of the Moving Creature, a 2013 collaboration between the Department of Drama, UVA’s School of Architecture, the Department of Studio Art, and the Stan Winston School of Character Art that culminated in a memorable parade of creatures held aloft by participants marching from the Arts Grounds to Nameless Field.

Warner also built bridges to the community with his talents and enthusiasm for theatrical displays. In 2018-19, he guided his students through a collaboration with “Hallowheels,” a program created by the Children’s Assistive Technology. Together, they designed and created Halloween costumes for children with limited mobility.

For these and many other contributions to his students and community neighbors, Warner won a Mead Honored Faculty award and numerous other University grants and awards.

“Absolutely the most positive person I’ve ever known,” said Tom Bloom, emeritus professor of drama. “Without exception, Steve was always willing to help out when asked. Over the years I sought his trusted advice on so many matters, from envisioning the Drama Department’s future to determining how many CFMs my air compressor needed to be rated at in order to operate my home spray paint rig.”

Another emeritus faculty colleague, Richard P. Warner (no relation), recalled the last time he saw Steve Warner on Grounds, in mid-October. Richard P. Warner and Erica Arvold had been invited to return to the Department of Drama to teach a weeklong film-acting workshop. It was his first time that Richard P. Warner had been back in the Helms Theatre in five years, and they were seated on stage teaching when he felt a presence standing behind him in the exit doorway closest to the dressing rooms and scene shop. When he turned, he found Steve Warner standing there with a big grin on his face.

“That same grin greeted me at every tech rehearsal or faculty committee meeting or every time I walked through his shop. That grin that said to you, ‘It’s OK. It’s gonna be hell today, but I got your back and we can have some fun,’” Richard P. Warner said. “I know that Steve's spirit … will always be with me, sure and steady, standing at my theater doors, grinning, offering me that hug, the one that I need to carry on.”