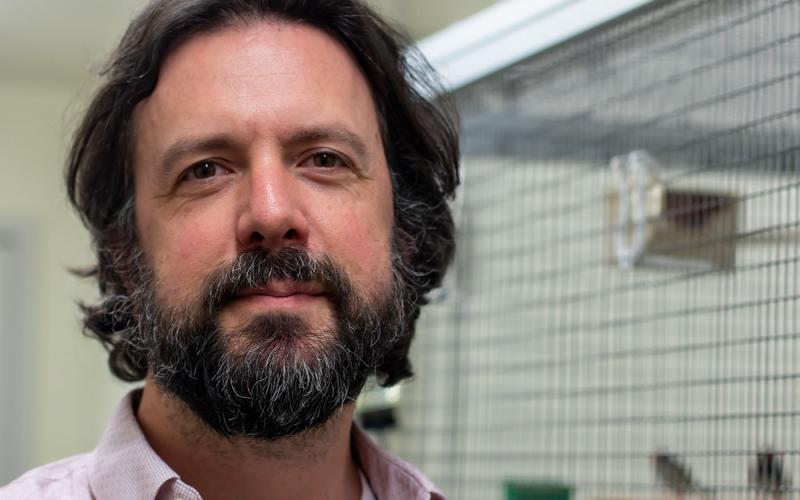 Most of the time, the human brain understands how to separate speech from even some of the most extreme background noise. That’s how you can share the day’s stories with friends at a crowded restaurant or get to know your date at a nightclub with the biggest sound system in town. But even though the brain has it figured out, science is still trying to understand how it works. The answers, however, may be in our own backyards.

Songbirds like starlings and finches use song to communicate their individual identity, their sexual fitness and other important information to their community, often in less-than-ideal acoustic environments, and understanding how their brains separate background noise from useful information has won assistant professor of psychology Dan Meliza a 2020 National Science Foundation CAREER Award, one of the most prestigious awards given to junior faculty members in the United States.

In the lab, Meliza explores the neural mechanisms that allow songbirds to recognize hundreds of different songs even when their surrounding environment makes them difficult to hear.

“We know that for humans, that’s established in the first year of life,” says Meliza. “What we don’t know is much about what’s happening in the brain.”

Meliza explains that learning how the bird’s brain solves this problem may help us understand an important component of how humans learn to understand speech.

“Our brains have created models of what speech is supposed to sound like and how verbal information is structured,” Meliza says. “And when you lose information from the outside world or when it's just confusing and difficult to interpret, those models fill in the missing pieces. We'd like to learn where those models are instantiated in the brain and how they work."

Finding the answers may ultimately play an important role in helping us understand communication disorders in humans. As we get older and our hearing starts to diminish, Meliza explains, our brains get worse at filling in the gaps.

“Hearing assistive devices have gotten better,” he says. “But it's not as simple as turning up the gain.”

The answers could also lead to improvements in speech prosthetic devices, and they could help improve speech recognition in machines.

To help advance that work over the next five years, Meliza’s CAREER Award includes a $600,000 grant, but winners of the highly competitive award must demonstrate innovation in both research and education.

Meliza says, “The CAREER Award is going to support an educational project that's near and dear to my heart: training people to write computer code for doing the type of science that involves the study of the brain."

Traditionally, only a small niche group of researchers acquire the skills to write the software that allows them to record data from thousands of neurons and synchronize it with laboratory observations, but as the field of neuroscience becomes more complex, there is a growing demand for scientists who understand both the research and the tools for managing large and complex data sets.

According to Alev Erisir, chair of UVA’s Department of Psychology, “Dr. Meliza is an outstanding teacher. His educational initiative in this CAREER Award combines his early experience as a software engineer and his extensive computational research to build an upper-level seminar called ‘Data Science for Neuroscientists.’ This course will integrate neuroscience concepts with programming skills along with best practices for software management. We are very excited to be able to offer this course in the coming semesters.”