This Physics Professor Has Invented a Better Earplug 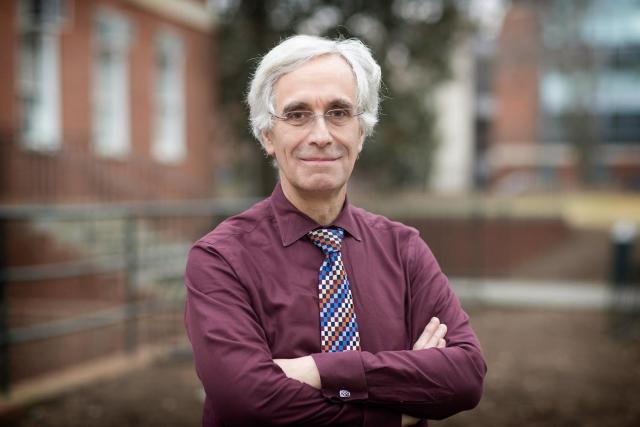 A unique silicone rubber developed by a University of Virginia physicist may soon help people avoid hearing damage when exposed to loud noises such as lawn equipment, concert music, heavy machinery in the workplace and gunfire.

Trademarked as “MemorySil,” the shape-memory material is first being marketed as an earplug called EarJellies, referencing the jelly-like texture of the rubber.

“It is a very soft material that can barely stand up under its own weight, but it remembers shapes and fights to retain them, making it ideal for conforming to the shape of an individual’s ear canal,” said Lou Bloomfield, the UVA physics professor who created the material after a range of experiments over years. “It forms a very good seal for blocking loud sounds.”

Like foam earplugs currently on the market, EarJellies are rolled between the fingers to create a longish plug that can be inserted into the ear canal. Once there, the material attempts to return to its original bulbous shape, and thereby presses against the canal walls, creating an essentially custom seal. But unlike foam plugs, according to Bloomfield, EarJellies give you more time to insert them correctly, and, they do not crimp, which would create gaps that could allow sound to pass.

“Studies show that most earplugs do not perform in the field nearly as well as they do in the lab,” Bloomfield said. “But EarJellies, when properly inserted, perform as well in use by real people in noisy environments as they do in controlled laboratory conditions. This is a superior product.”

San Francisco-based entrepreneur Rudy McEntire identified Bloomfield’s technology and worked with the UVA Licensing & Ventures Group to license the technology, and to produce and market the plugs. EarJellies will be introduced to the public with a Kickstarter campaign beginning near the end of February, Bloomfield said, and then sold online and through a few retail outlets this summer.

Bloomfield is a popular teacher of everyday physics, and an inventor.
Dan Addison / University Communications

“These earplugs not only shield against noises that can cause hearing damage, they also are exceptionally comfortable to wear,” Bloomfield said. “They are really soft, and reusable. Test users have said they feel like almost nothing is in their ears.”

Bloomfield said he believes the product will prove popular with concert-goers, musicians, people who work in industrial environments, the military, sport shooters, people who are bothered by noise when trying to sleep, and swimmers who want to keep water out of their ears. They also are made in different sizes to accommodate different size ear canals, from children to adults.

“Our tests show that low-frequency and impulse sounds – types that often cause ear damage, such as shooting, banging and drumming – are reduced particularly well with this product,” Bloomfield said. “At the same time, sound distortion is minimal, so concert-goers still can enjoy music while protecting their ears.”

Bloomfield is hopeful that the military will take a close look at the product. He said the two biggest health care expenses incurred by the Veteran’s Affairs department are for hearing loss and tinnitus – ringing in the ears – both often resulting from prolonged exposure to loud noises.

“The cofounder of our company, Rudy McEntire, got interested in this material because he was seeking better earplugs for his daily commute on the metro system in San Francisco where he lives. He really believes in this product.”

The material that is being used in EarJellies is an iteration of a silicone rubber that Bloomfield developed several years ago as a simple means to stabilize wobbly chairs. He needed a soft material that would fight to hold its shape after being placed under a chair leg. The material had interesting properties, and he began looking for other ways to use it. He and McEntire came up with the earplugs idea. Future products include ear tips for hearing aids and ear buds, and ear muffs or headsets.

“I’m bringing a physicist’s perspective to hearing protection,” Bloomfield said. “I’m having a lot of fun drawing from the basic sciences and putting it to practical use. We’ll see how the earplugs do on the market, and we’re looking for a range of other possible uses for the material, such as cushioning for shoe insoles, canes, crutches and prosthetics.

“The remarkable thing about the material is that it can be molded to a specific shape, but will conform to the shape of anything it comes in contact with. It learns new shapes and remembers them for a while. Left alone, it gradually returns to its molded shape. There probably are many applications that we haven’t even dreamed up yet.”