A Winning Season: A Sloan Research Fellowship Is Just One of Many Accolades for Chemist Robert Gilliard This Year 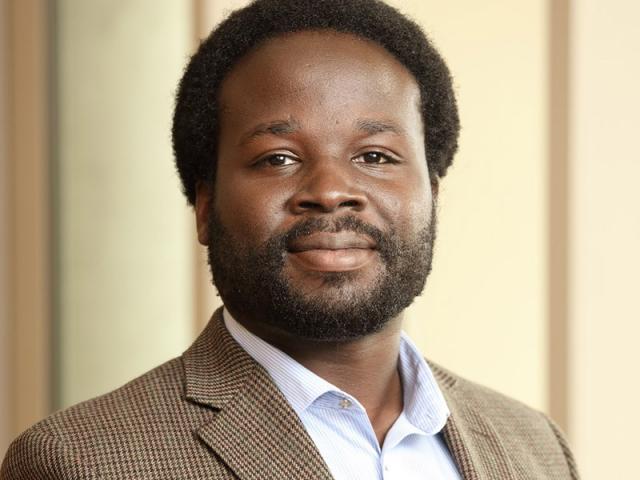 Assistant Professor of Chemistry Robert Gilliard has been named a Sloan Research Fellow for his innovative research in energy storage and optoelectronic materials.
Tom Cogill

If anyone has made the best of a bad year, it’s Robert Gilliard. When his University of Virginia lab closed for several months last because of COVID-19, Gilliard, an assistant professor of chemistry with the College and Graduate School of Arts & Sciences, put more of his time into writing papers and pursuing grants. And the effort has paid off in a string of awards and honors, including a 2021 Alfred P. Sloan Research Fellowship, one of the most prestigious and competitive awards given to early-career scientists in the United States and Canada in recognition of distinguished research performance and their potential for making substantial contributions to their fields.

Gilliard’s work focuses on the s-block and p-block elements of the periodic table, the left and right sides of the table that include elements such as boron, phosphorous, bismuth and magnesium. These elements are often neglected by researchers but could play an important role in the chemistry of energy storage and conversion. Gilliard is particularly interested in their use in thermochromic or thermoluminescent materials that emit light or have the capacity to change color and that play a significant part in the function of sensors as well as computer and cellphone displays.

The practical applications of the science are especially timely as the medical community faces the challenge of managing a COVID-19 vaccine that must remain cold to be effective.

“One of the things we're looking at now is developing materials that can sense a specific temperature and change color based on that temperature,” Gilliard explained. “One application of that is for the Pfizer [COVID-19] vaccine which has to be cold for stability purposes, but if you can imagine if a vial of the vaccine were coated with a thermoluminescent, thermochromic material and as soon as the temperature increases during shipping, the color of the vial would change; that would immediately tell the administrator the vaccine had been compromised.”

The science could also help improve the safety of foods that need to be shipped and stored at certain temperatures, and it has the potential to play a part in the development of temperature-sensitive fabrics that could help keep emergency personnel like firefighters safe on the job or allow military camouflage to change color as soldiers move from one environment to another.

Gilliard is also interested in how these elements could be used to reduce the emissions of carbon dioxide, a greenhouse gas that contributes to global climate change.  He believes that the s- and p-block elements could serve as alternatives to a group of elements known as transition metals, including platinum, gold, rhodium and iridium, which are more commonly used as catalysts in the CO2 reduction process but are also some of rarest and, therefore, some of the most expensive elements.

“We look at it from the perspective of, ‘can we understand the chemistry of other elements and try to mimic the transition metals or try to observe different properties [of more abundant materials] that we don't know exist at this point?’” Gilliard said.

In addition to winning the Sloan Research Fellowship for his work, an award that comes with a two-year grant to support the work of his lab, Gilliard estimates that he has won more than $1 million in grant funding in the last year alone.  He won the American Chemical Society’s Petroleum Research Fund grant and a National Science Foundation (NSF) Major Research Instrumentation grant that will fund the purchase of a state-of-the-art single crystal X-ray diffractometer for UVA; this tool will help not only Gilliard’s team but 14 other research teams in chemistry, physics and chemical engineering, as well as 14 partners at other predominantly undergraduate institutions. His lab has also won an NSF CAREER award, another highly prestigious grant given to talented young researchers and educators.

But the grants are only part of the story. Last year, Gilliard was named to the 2020 Class of Chemical and Engineering News’ “Talented Twelve,” an elite international group of young scholars who are considered rising stars in the world of chemistry. He was named a Negative Emissions Science Scialog Fellow by the Research Corporation for Science Advancement for his work in the chemistry of CO2 reduction and received a Collaborative Innovation Award to purse projects with researchers at the University of Colorado, Boulder and the University of Michigan. He won a 2021 Thieme Chemistry Journal Award for promising young researchers with the potential to be leaders in their field, and he was appointed to the editorial advisory board of three journals, including Inorganic Chemistry, Chem Catalysis and Chemical Communications.

Despite the windfall of accolades bearing his name, Gilliard, who also serves as director of undergraduate research for the Department of Chemistry, is quick to give credit for that recognition to the graduate students and postdocs with whom he works, as well as the undergraduates on his team. He prefers to shift the spotlight to the impact of his work as an educator.

“A major part of my mission here at UVA is undergraduate education and undergraduate research,” Gilliard said. “My group has trained five undergraduates so far. They are doing excellent work and have really contributed to the success of our group. Of the 20-plus papers that we’ve published, seven of those have had undergraduate co-authors.”

“The most important thing for me is the impact on other people’s lives,” he added. “In my research group, the graduate students, the undergraduates and the postdocs are doing well, and many of them will move on to excellent places because of the work they’ve produced. Being able to change the world in that way – training folks to have them go on to the careers that they want – makes me very happy.”