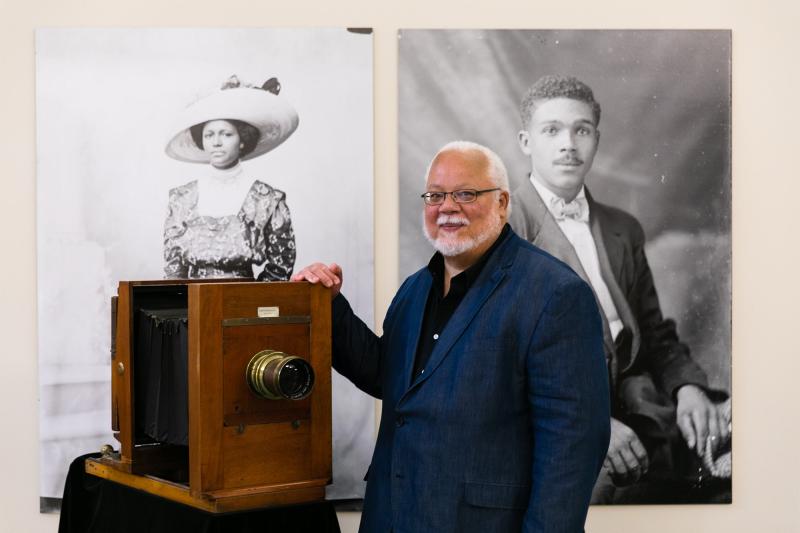 John Edwin Mason, a UVA associate professor of history who directs the Holsinger Studio Portrait Project, poses with one of the portrait studio cameras. (Photo by Tom Daly)

She knew her grandfather well – or so she thought.

But then DeTeasa Brown Gathers found out that he had been married to the girl in the photograph.

Among the 100 spectacular photographs in the new exhibition of the Holsinger Studio Portrait Project in the University of Virginia’s Albert and Shirley Small Special Collections Library, there’s the grandfather-granddaughter pair of Anthony T. Buckner, a prominent merchant in Charlottesville, and Eileen Buckner.

At some point when she was grown, Eileen married Tommy Rhodes – Gather’s grandfather – but the union didn’t last long, Gathers said as she gazed at the Buckners’ dignified faces in the photo. She learned of this family connection from genealogist Jane Smith, who is researching African American families in the Daughters of Zion Cemetery.

At a recent exhibit, Gathers excitedly pointed out this recent finding and showed her ancestors’ portraits to history doctoral student Chloe Porche. 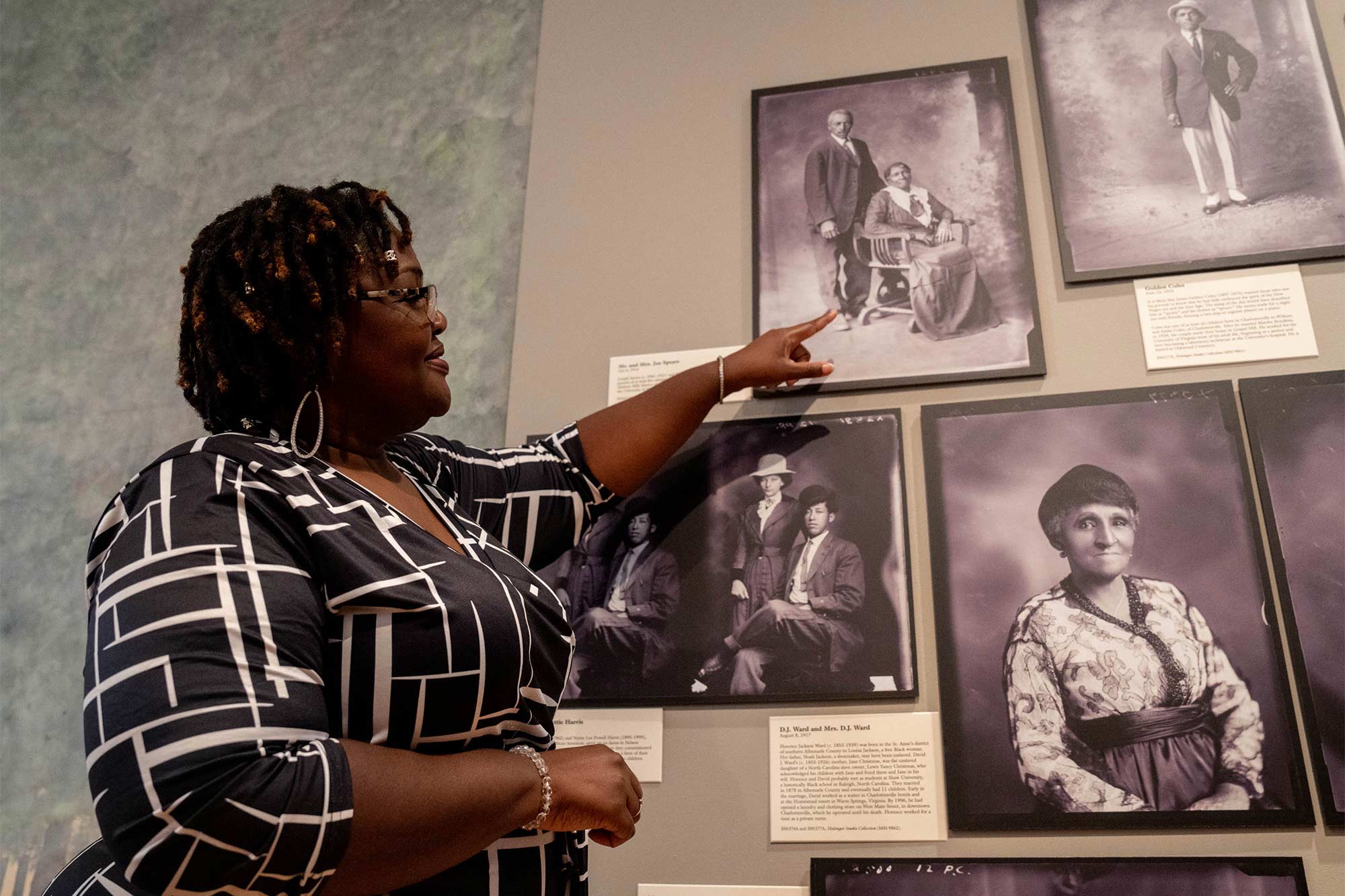 DeTeasa Brown Gathers, who works for UVA Health, has located among the portraits members of her family tree. (Photo by Sanjay Suchak, University Communications)

The portraits and the exhibition of them are not new, of course. The images date to the Jim Crow era and the University acquired the collection in 1978. But what is new is the work UVA researchers have undertaken match names with the faces.

That research has helped tell a more complete story of African American history in Charlottesville, and it has helped descendants like Gathers better understand their personal history.

Gathers, who works in UVA Health’s Department of Surgery, has been seeking her family genealogy for several years now. She co-chairs the Descendants of Enslaved Communities at UVA and said it’s exciting to keep finding connections between the portraits and living people.

Born at the UVA Medical Center, Gathers is one of the many people whose families have longtime ties to the University as workers and neighbors, before being admitted as students and faculty. Several years ago, she discovered that another Holsinger studio portrait depicts her great-grandparents, Joe and Peggy Spears. Gathers saw the Spears portrait displayed on the fence when the Memorial to Enslaved Laborers was being built about four years ago.

Although she never cared much about history before, Gathers said her interest has grown in recent years. She is glad to see UVA paying more attention to telling what actually happened and recognizing the contributions of African Americans who worked for UVA. “They were devalued, but now, this will show their value,” she said. 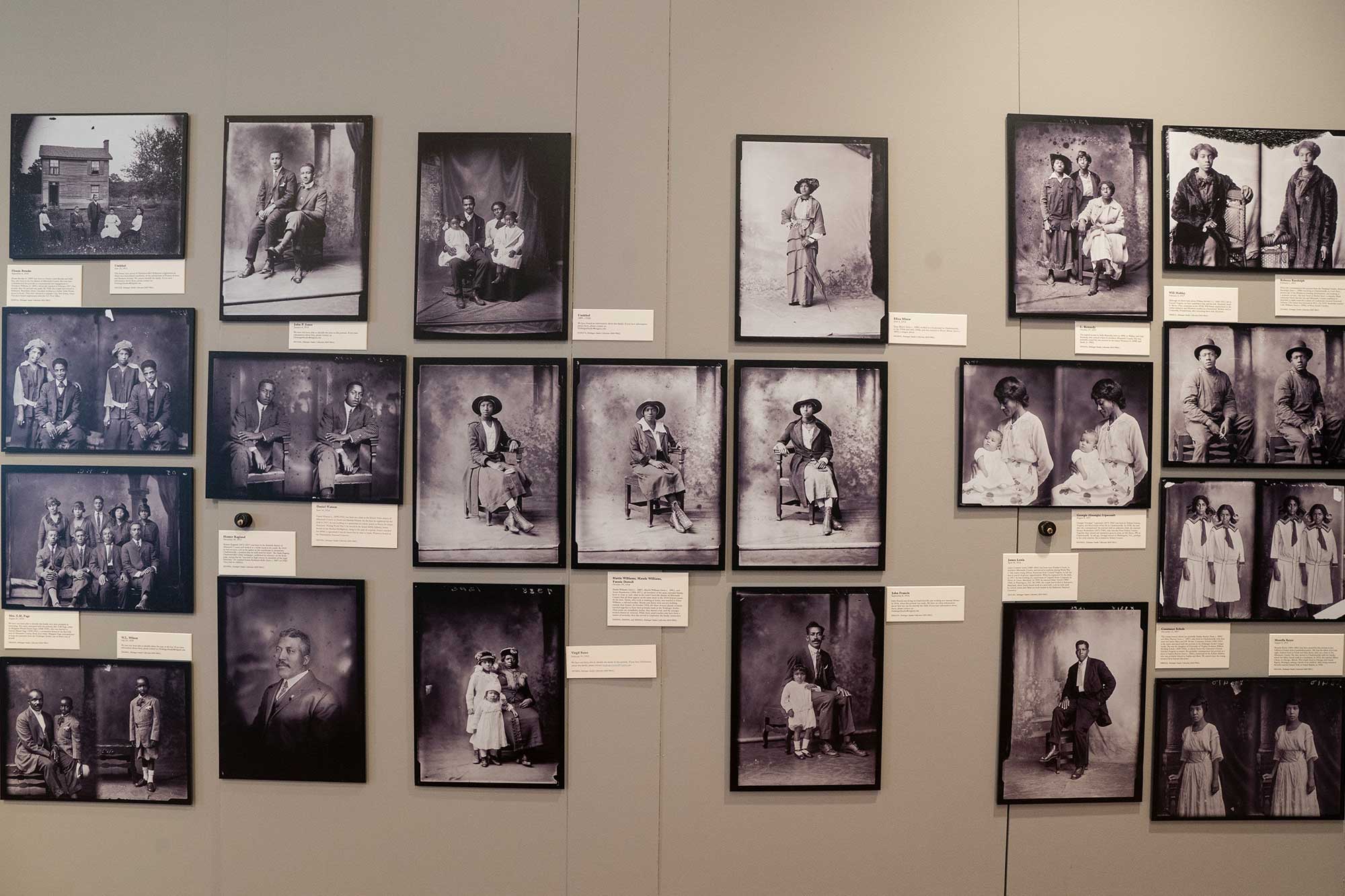 When the University acquired the Holsinger Collection in 1978, many of the portrait subjects were unknown. Researchers have sifted through local and national records to identify the men, women and children in the photographs. (Photo by Dan Addison, University Communications)

“These people were – and are – a real part of our history,” Gathers said, adding that the exhibition and project connect to the “true work of descendancy – to show that our ancestors were real people. They existed. They were here. They had style and class.”

With the exhibition, called “Visions of Progress: Portraits of Dignity, Style, and Racial Uplift,” chief exhibition curator John Edwin Mason, a UVA associate professor of history and a documentary photographer who has directed the Holsinger Studio Portrait Project since 2015, expanded on that point, saying the project aims to transform the way people see Black history. Gathers and another resident, Edwina St. Rose, also have been community engagement advisers on the Holsinger project.

“These portraits speak silently and powerfully, telling us something about the African American people who commissioned them,” Mason said. “They were careful of how they dressed and what facial expressions they used. They were self-consciously presenting themselves as they wished to be seen and understood to the world – and doing so in the Jim Crow era, when the color line was sharp and strict.”

In fact, most of the people in the photographs were poor and marginalized. About 80% of African American women worked outside the home as domestic servants, Mason said. Most people likely walked or took the train to get to the studio, located across the street from Charlottesville’s train depot.

Nevertheless, they are not defined by their occupations, and the portraits show their sense of dignity, he said.

“You don’t see oppression in these photos,” he said. “They are contradicting the demeaning racial stereotypes of the era, those that African Americans knew all too well and couldn’t avoid.”

The overall collection comprises about 10,000 glass plate negatives of life in Charlottesville and Albemarle and Nelson counties from the 1890s to the 1920s, taken by the Holsinger Studio. More than 600 portraits are of African American citizens in Central Virginia.

The exhibition – which contains more photos and more information about the people and the era than ever released before – is not the culmination, but it is a milestone, Mason told an audience of about 100 visitors at the public opening on Thursday. It brings together years of collaborative efforts.

Others contributing to the exhibit include Holly Robertson, curator of University Library exhibitions, who designed the displays, and library staff including Stacey Evans, an imaging specialist and project coordinator, who led a team in rephotographing the glass-plate negatives.

“We can’t change history, but we can change the way people see it,” she said, adding that the portraits show people who were more than society might’ve said they were. 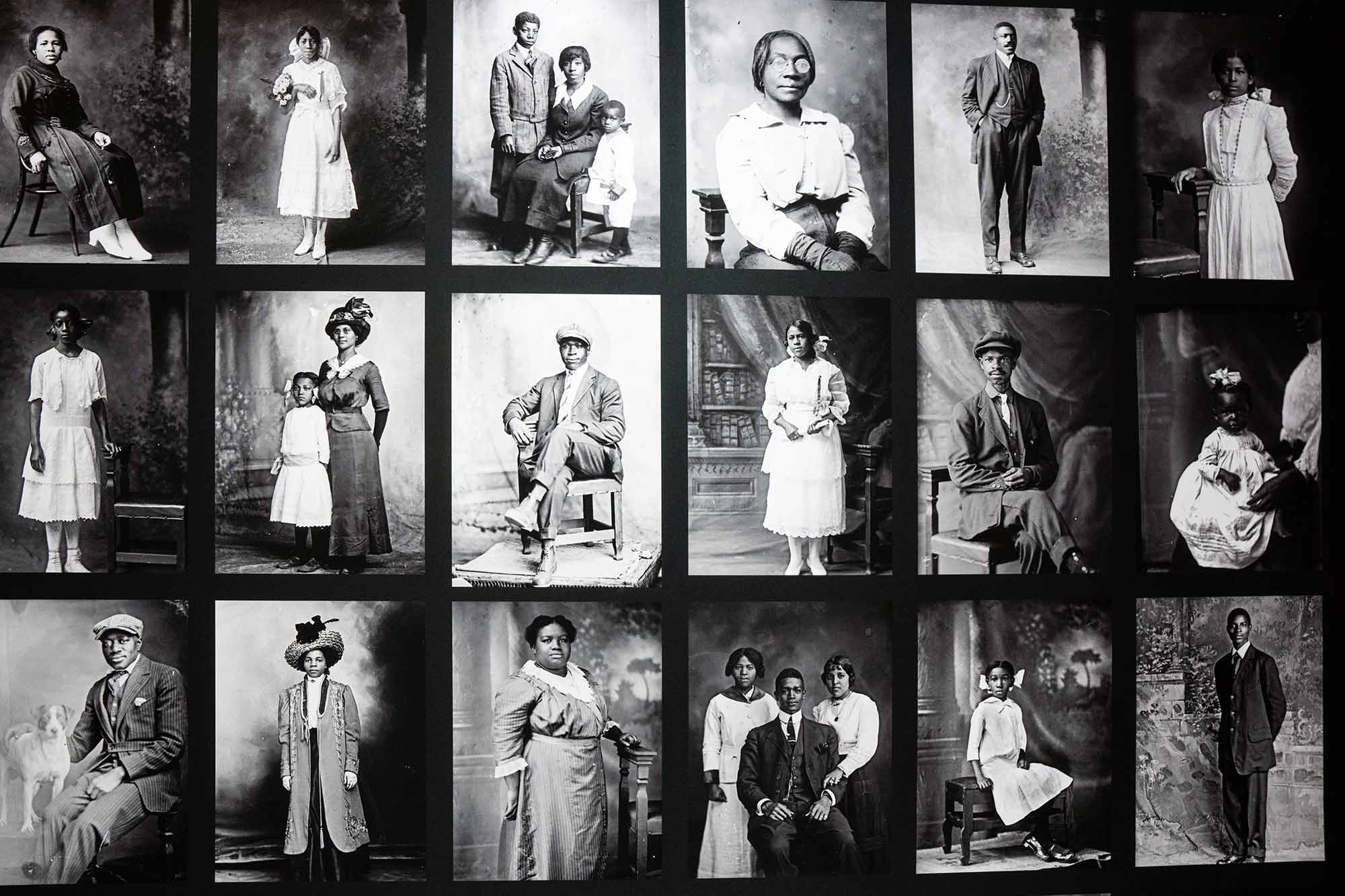 Although some of the 600 portrait subjects are now identified, scores more are not. UVA researchers are committed to learning more about the portraits, the subjects and their lives. (Photo by Dan Addison, University Communications)

She has also enjoyed the community engagement part of her work and hopes to continue that involvement. She has posted portraits and short biographical information on social media to inspire viewers to interact with the posts or contribute biographical details and stories.

UVA Institute for Advanced Technology in the Humanities director Worthy Martin has provided the project with a web presence to share its research. Virginia Humanities, 3Cavaliers and the Jefferson Trust have provided grants and support for additional ways to spread the word and display these portraits of African Americans and the cultural context surrounding their production.

Mason said it’s been exciting to have people identify their relatives and family members. Combining archival research with community participation and family history has been and will continue to be a key component of this project, he said.

Next steps include traveling or pop-up exhibits that’ll be geared toward specific places and communities, including churches, civic centers and schools – to show portraits to more people. 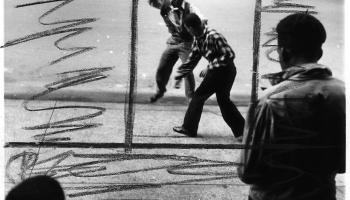 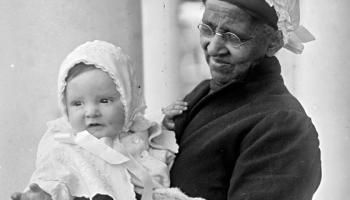 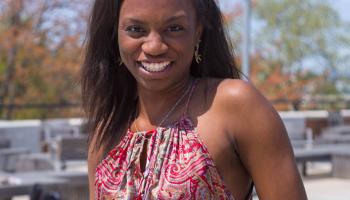 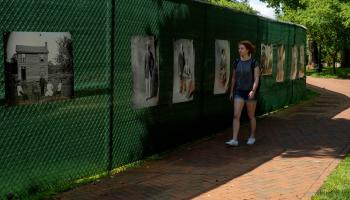 Powerful Photos for a Powerful Site 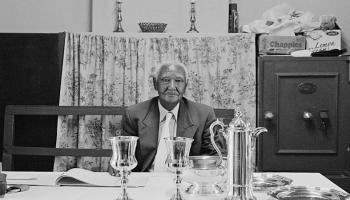 After Apartheid: Famed ‘Struggle Photographer’ at U.Va. to Show a Nation Reborn